Nancy Basket may not have finished the art education degree she started at Blackhawk College in Moline, Illinois. She may have learned instead, as she says, through “the school of hard knocks.” But this woman is an artist and art educator extraordinaire. 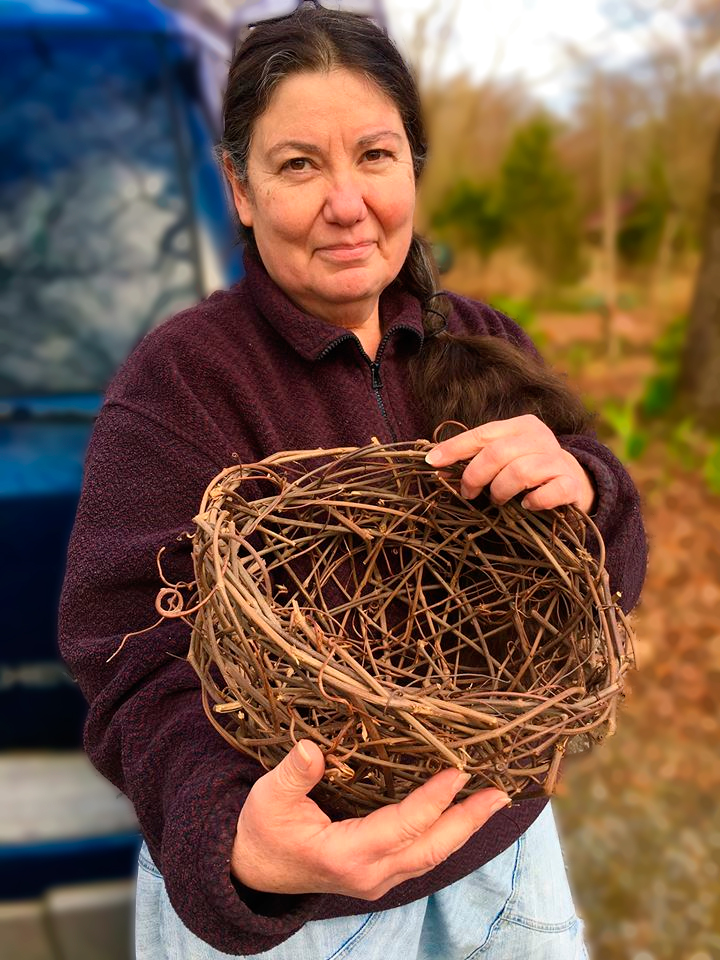 She became intrigued by basketmaking 40 years ago, and soon afterward met a Cherokee man who sold pine needle baskets shaped like bears. She asked to buy one, but he said, “Your job is to make them.” She’s been doing that ever since. And 10 years later, having become skilled at this craft, she adopted her Cherokee grandmother’s name of Basket.

She started by using pine needles but tried different materials native to the areas where she lived. These days, she works mostly with pine needles and with kudzu, which has to be used when green and fresh. The thicker vines are available all year. She keeps stretching what kudzu—which she calls “a miracle vine”—can do, which includes making baskets, paper and cloth.

One of her passions is teaching Cherokee culture in prisons—she helped start the Native American Prison Program in South Carolina—and she enjoys working with juveniles, who clearly understand kudzu as a metaphor. “I tell them, ‘Kudzu has a bad reputation. You kind of do, too. But you can transform yourself,’” she said.

From her home in Walhalla, she has traveled the Southeast teaching in public schools and just finished a four-month residency at the Native American Studies Center in Lancaster.

She works small and large, from miniatures (“small examples of my work that people can afford,” she said) to eight-foot sculptures. She made four five-foot-tall lampshades for a restaurant in Asheville, each one taking 80 hours to create. Some of her large shades require a cage made by a blacksmith over which she weaves split kudzu vines. When a designer in California wanted something similar, she had to build a box to ship it.

Her work has been featured in the movie The Last of the Mohicans (cattail leaf mats, corn husk masks and bark baskets used as props) and for TV’s Young Indiana Jones (a large hot air balloon crafted out of cattail leaves).

Every piece she makes is unique. “I’m always experimenting with size, shape, and different functions,” she said. “I love challenges.”

Diane DeMont Is a Lifelong Performer